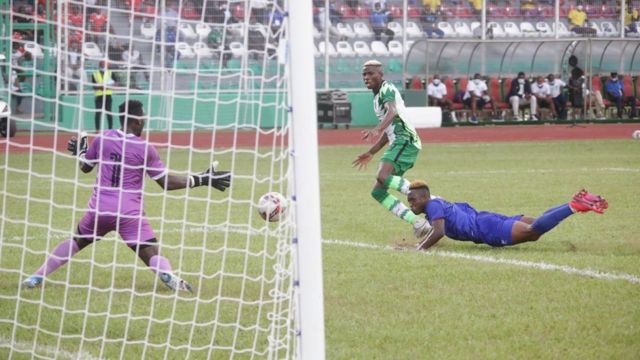 The Leone Stars of Sierra Leone came back from 4-0 down to hold the Super Eagles of Nigeria to a shocking 4-4 draw in Friday’s Group L 2022 Africa Cup of Nations (AFCON) qualifier in Benin City.

The Eagles looked to be cruising in the first half thanks to a brace from Alex Iwobi and goals from Samuel Chukwueze and Victor Osimhen before the visitors started the fightback.

The Eagles got off to a very good start in the 5th minute as Iwobi pounced on a loose ball to score from the edge of the box and dictated the pace of the game.

Sierra Leone, however, clawed their way back and almost drew level in the 21st minute through Al-Hadji Kamara who had all the time in the world, but volleyed over from inside the box following a cross from Buya Turay.

A minute after Kamara’s miss the Eagles doubled their lead thanks to Osimhen who finished at the far post off a low cross from Zaidu Sanusi.

Iwobi grabbed his brace in the 28th minute to make it 3-0 after curling into the top corner inside the box.

The Eagles continued to pile on pressure on their opponents and were once again rewarded in the 31st minute, this time through Chukwueze.

This was after he received a flick from Osimhen and went on a solo run before putting the ball past the Sierra Leone goalkeeper.

However, with two minutes left in the first half, Sierra Leone pulled a goal back which came off the boot of Quee Kwame after an Eagles’ player lost possession in a dangerous area.

Osimhen almost got his brace early in the second half after getting to the end of Ahmed Musa’s free-kick, but his header came off the bar.

On the hour mark, the Eagles made a double substitution as Semi Ajayi replaced Leon Balogun, while Kelechi Iheanacho came in for Musa.

Sierra Leone got their second goal in the 72nd minute to make it 4-2 after a cross by Kevin Wright was met with a great header by Kamara.

The Eagles were forced to make another change as Osimhen came off the field injured, and was replaced by Chidera Ejike.

The Leone Stars scored again to make it 4-3 off Mustapha Bundu’s stunning goal.

and in the 86th minute Kamara got his second to complete a stunning 4-4 comeback which left the Eagles shell-shocked.

The News Agency of Nigeria (NAN) reports that following the draw, the Eagles still top the group on seven points, while Sierra Leone have two points.

Both teams clash again on Tuesday in Freetown in the reverse fixture of the AFCON qualifier. (NAN)